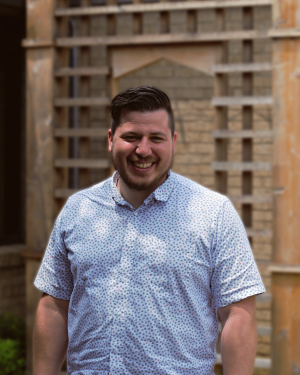 Kevin was born in Dallas and grew up in Plano. He graduated from Collin College in 2013 with an Associates of Arts Degree. Following college, Kevin served as a NET Missionary in Ireland working with teenagers and young adults. In 2017, he moved back to the U.S. to enter Seminary for the Diocese of Dallas. During his years in Seminary, he earned a Bachelor’s Degree of Philosophy from St. Joseph’s Seminary College. Since discerning out of the Seminary, Kevin has volunteered with the Youth Ministry at St. Ann's in Coppell, and has worked as a speaker at schools, and has spoken to thousands of teenagers in various places around the U.S., as well as in Ireland, England, Ecuador, Guatemala, the U.A.E., and Oman. His topics have ranged from forming healthy relationships to developing self-respect and self discipline.  Kevin has a passion for reaching students with the truth that they are loved and able to truly live as disciples of Jesus Christ. He eagerly jumps at the opportunity to discuss solutions to the many issues facing young people today, and he believes that sharing one’s own story is half the battle of inspiring change and bringing others to Christ. Kevin is so excited to bring that passion to the Youth and Young Adult Ministry programs here at All Saints.

Kevin lives in Irving, TX where he enjoys playing music, cooking, learning languages, watching movies/anime, and playing a good board game with friends.